“Goodbye Old Friend and May the Force Be With You.”

After the latest “Battle of Scarif” update, Star Wars Battlefront 2 is no longer receiving support. After a few days of contemplation and Jedi meditation, I’ve decided to open my heart up and say goodbye to the unlikely superstar game. Here is my love letter to Battlefront 2.

As Obi-Wan says, “Goodbye Old Friend, and May the Force Be With You.”

Because sometimes, the fate of the Far, Far Away Galaxy is more important

Well folks, as journalism is something that is very important to me, I must admit that the story of the Star Wars saga is almost as important.

When this new trailer aired during the Bears-Vikings game last night, I found myself more concerned with the wellbeing of Luke Skywalker, Leia Organa, and the Resistance much more than the wellbeing of Mitchell Trubisky and the Chicago Bears offense. Which, being from Chicago, is a dangerous thing to say considering the Bears future lies on the shoulders of Trubisky.

Regardless, this trailer has a lot to unpack and I’m sure it concerns many other journalists in this galaxy or in a galaxy far, far away.

So, let us begin:

Firstly, this brand new poster was released yesterday afternoon and it began discussion of what could happen in the trailer. A lot is going on here and the thing that stuck out the most to me was Luke Skywalker’s face being half blue and half red.

Clearly, there are some implications there about where Luke stands on the Dark side and the Light side of the Force. It also adds context to Luke’s line from the last trailer where he says, “It’s time for the Jedi to end.” Luke stands in the middle of whether he should or shouldn’t train Rey in the ways of the Jedi and the latest trailer shows us that. I’ll bring this back up later.

There’s also a heavy focus on Leia; something I’ll also bring back up later. Then, we also see a lot of Red and White in a vehicular battle on the new planet, Crait. Crait, according to director Rian Johnson, is “very remote. It’s uncharted. It’s a mineral planet and so there are mines on it. [There are some] beautiful design elements and I hope some really unique ones that we’re able to bring into it.”

And of course, we have an unmasked Kylo and other supporting characters (Poe, Finn, Captain Phasma) which again, I’ll bring up later.

Here, we see Kylo Ren observing the construction of First Order AT-STs and AT-ATs. For the uninitiated, AT-ATs are the robot camels from Empire Strikes Back and AT-STs are the two-legged ones (apparently non-Ewok resistant) from Return of the Jedi.

To many, this is unimportant, but in the next shot:

BOOM. Big-time front line of the First Order’s AT-ATs ready to fuck shit up on Crait. While this is going on, we receive narration from Supreme Leader Snoke (Andy Serkis) about presumably, Kylo Ren. He says, “When I found you, I saw raw, untamed power; and beyond that, something truly special.”

We see quick flashes of Kylo and his troopers invading something that looks like a mine, so I’m going to assume it’s Crait. Then, we see a helmeted Kylo, which I’ll also assume is early on in the film, because later in the trailer, we see Kylo smash this helmet:

But, Snoke sounded like he was giving Kylo the lecture of a lifetime. He’s got to be chewing Kylo out for getting slashed in the face by an inexperienced Lightsaber dualist like Rey. Which, speaking of Rey:

PALE-BLUE GRAFLEX LIGHTSABER IGNITION FROM REY. Something I noticed during The Force Awakens was that Luke/Anakin/Rey’s Lightsaber looked a little too dark. So, to see it look like this again was a very lame nerd thing that I got excited about.

Then, we see the sweet reunion of Luke’s hand and the Graflex Lightsaber:

This is nice, because the last time, it didn’t end too well:

Next, these flashes of scenes are being narrated by Rey:

Rey hiking to see some Jedi relics, which I assume is what she is reading or having visions from in the first trailer [link above].

Jedi training looks fuckin’ sweet by the way. But, Rey says, “Something inside me has always been there. But now it’s awake and I need help,” clearly indicating her use of the Force in Episode VII.

But then, shit gets real:

Rey’s powers are literally groundbreaking. We see Luke Skywalker nervous for the first time in a Star Wars movie since he was training with Yoda on Dagobah and saw this:

But, we see Luke’s flashbacks of a Jedi temple burning after an attack on it, by presumably Kylo and the Knights of Ren, whom we still know nothing about. Luke then says, “I’ve seen this raw strength only once before. It didn’t scare me then, but it does now.” Summed up in one picture: 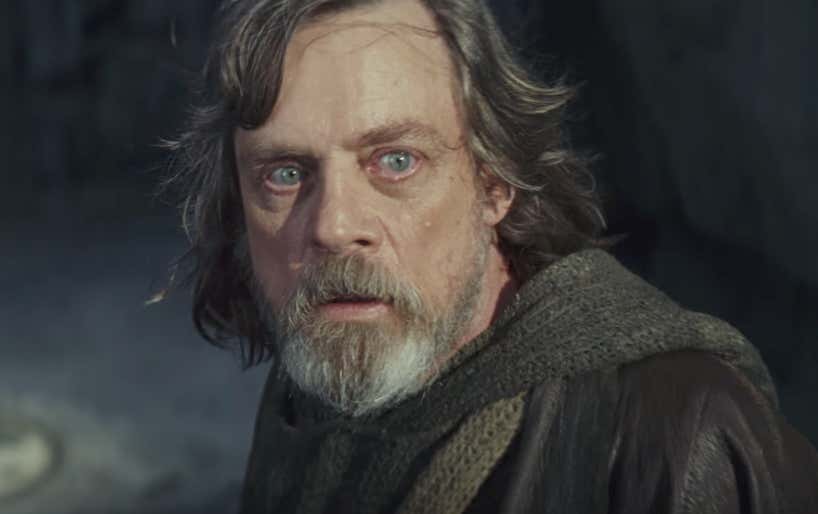 Boom. Luke is nervous. He’s seen this strength once before: if it was a pupil of his, he’s clearly talking about his nephew, Kylo Ren. But, if we wanted to get deep into Star Wars
lore, maybe he saw this strength in his father or the Emperor back in the day. But, it’s probably and most definitely about Kylo.

But the craziness doesn’t stop there folks. The next thing we see is a mask-less Kylo, flying around in a TIE Fighter and narrating. He says, “Let the past die. Kill it, if you have to. That’s the only way to become what you were meant to be.”

He says this as we see this:

Will he go the ultimate evil route and kill his only remaining parent, Leia? Maybe. But, I think this is our first instance of misdirection by this beautifully edited trailer. I think Leia might be in a different location at this point in time, but, what do I know? Kylo might be very ready to take out his mom in this very cool-looking space battle.

Let me say this though: I really don’t think Leia Organa, one of the strongest and most iconic Star Wars characters ever, is going to die in a space explosion. I truly believe that she won’t. It’d be really lame if that happened and it certainly wouldn’t be an honorable death for her character. But, if Kylo has to “become what [he is] meant to be” then he really could be killing Leia here or anywhere throughout the movie. We really don’t know folks, this is one where we’ll have to wait until December 15 to see.

Next up, CHEWIE FLYING THE MILLENIUM FALCON LIKE A BADASS WITH THIS ADORABLE PORG:

Porgs are about to be the hottest toys of Christmas 2017 and maybe for the rest of time. They are absolutely adorable. This little guy only proves that. Regardless, this seems to be in a mine on Crait.

Could these crystals in here though, bear with me for a second, could they be Kyber crystals (the crystals that power lightsabers and the Death Star)? Probably not, but there aren’t many crystals in the Star Wars saga. But, a bit later in this trailer, we also see crystal foxes of some sort with Leia:

So maybe that’s just how everything on Crait is.

But, in these next few shots, we hear Poe Dameron saying, “We are the spark that’ll light the fire that’ll burn the First Order down.” While he, in his badass X-Wing, is trashing First Order ships like it’s his fucking job:

As a Resistance Pilot though, it is his fucking job.

Then, we see some more flashes of Finn fighting Captain Phasma:

This is what I’m really excited about. Phasma was the lamest character in Episode VII. She did nothing. She is now getting a huge chance at redeeming herself in this film by fighting one of the best characters from Episode VII, Finn.

Finn is also holding that electrocuted, bullshit thing that TR-8R (TRAITOR!) guy fought him with in Episode VII:

So, if you didn’t think this trailer was dope yet, then here. we. go.

Some battle-scene flashes lead to this:

MY BOY LUKE HAS FALLEN IN THE RAIN. He narrates, “This is not going to go how you think.” This is without a doubt the entire theme of the trailer.

Judging by this line, The Last Jedi is about to be one of the craziest movies we’ve ever seen. My sister wants to believe that it could be better than Empire Strikes Back. If this movie is even close to Episode V, then I will be amazed. I’m just ready for a crazy-awesome Star Wars film. If it’s better than V, good. If it’s not, just don’t be as bad as The Phantom Menace.

Back to the conclusion of this trailer:

BOOM. We see Snoke(not as a hologram for the first-time) with the Force-chokehold of a lifetime. We thought Vader’s chokehold was impressive; Snoke literally has Rey screaming for mercy in mid-air.

Then, as Rey narrates the end of the trailer with the line “I need someone to show me my place in all this.”

She’s speaking to someone off-screen but then, these two scenes are spliced together:

IS REY REALLY ABOUT TO JOIN KYLO ON THE DARK-SIDE? In my opinion, fuck no. She’s the hero of this story. The giant prediction of her being a Skywalker is still left unanswered. Another Skywalker going evil is something the franchise can’t afford. Whether she’s part of the family or not, I really don’t think she’s going evil.

If you want more proof, look closely at the lighting and backgrounds of the two gifs above. Watch it again in the trailer if you want. They’re in two different places I think. Kylo is somewhere in a hellish environment with fire and hell falling behind him. Meanwhile, Rey just has a softer glow on her face with a plain background.

Luke’s Jedi School burns to the ground and he consoles with Artoo. Kylo’s face also isn’t bandaged in this scene:

Therefore, it is my belief that the Kylo-Rey conversation is one of a figmented, Force-vision. Or, Kylo reaching out is during a time where he is destroying and overthrowing Luke’s Jedi school. I think it’s another case of clever editing and scene-splicing. The editors of this trailer are excited about trying to fool us. This movie is about to be insane. Whether these two shots are connected or not, this movie is going to be insane.

We still have so much to see. Don’t forget: Benicio Del Toro, Laura Dern, Domhnall Gleeson, and Kelly Marie Tran are all in this movie and they haven’t appeared in any of the trailers yet.

Rian Johnson and other Episode VIII execs apparently branded this trailer with *Spoilers*. I think it’s all part of the misdirection ploy. I don’t think the Rey-Kylo scene or the Leia-Kylo scene are connected. I think they were cleverly spliced together to get our nerd juices flowing.

Am I right? Maybe. Maybe not. What I do know is this: Star Wars: The Last Jedi comes to theaters on December 15 and that day can’t come soon enough. We will all find out then. Thank you for sticking with me for this crazy-long blog.

May The Force Be With You.